Clothing of people in Qajar era

Clothing of people in Qajar era

Clothing | At the time of beginning of Qajar dynasty, despite the change of previous governments, royal clothing of past, especially the Safavid period, continued until the Fath Ali Shah of Qajar. The state of the clothing of people in this era consists of men and women clothing. 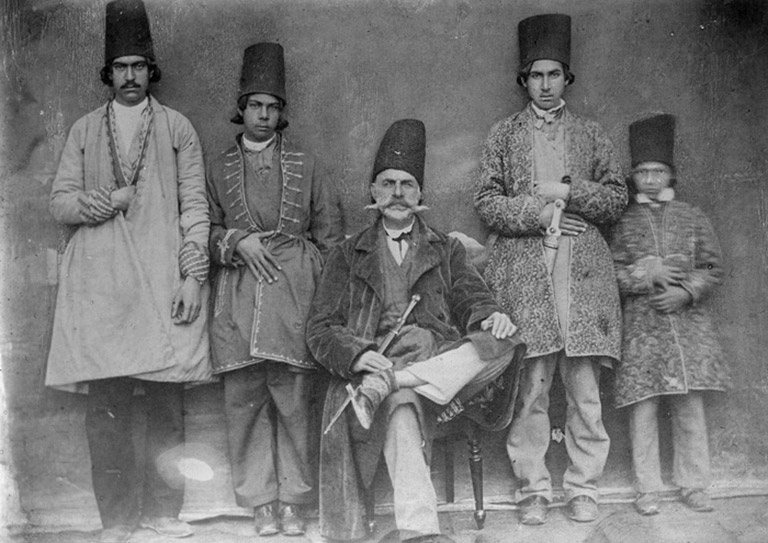 The cap of Qajar period was a cone with a height of thirty-five centimeters.

Shal –e Kamar was a fabric belt which was wrapped around the waist. Clerics, marketeers, businessmen and most of men from different social classes, had wrapped Shal –e Kamar around their waist.

Arkhalogh was a type of cloth that men wore it under Ghaba/Qaba (see below) and women wore it over their clothes.

Ghaba was worn over Arkhalogh which was in green, blue, violet and red color.
the length of Ghaba is up to knees.

Kamarchin was a special coat which was worn over Arkhalogh. Kamarchin was sewn from colorful fabric, or of velvet. Its type depended on season or social status of people.

Koljeh or Kolija (in Persian it means: a coat which is worn over shirt) which was worn over Kamarchin. In summer, it was never used, except at a ceremony like a wedding and formal party.

Jobba was considered as ceremonial clothes in Qajar era. This cloth worn especially by high-level staff, such as ministers, judges, doctors, clerics, and other officials. Usually it was made of high quality and precious fabrics. 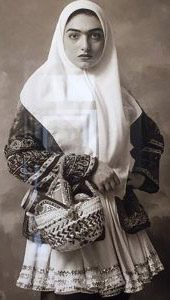 In the early Qajar period, women’s clothing was a short-sleeved shirt without collar that was ornamented with golden and pearl- shaped buttons. Usually women wearing shirts, loose pants similar to men’s trousers and a short “Arkhalogh”.

After Naser al-Din Shah traveled to European counties, he forced his wives to not wear Chaghchur (long pants for women and they had to wear short Shalitah. Shalitah was a short, skirt that women wore over pants.
During the period of Mozaffar ad-Din Shah to the end of the Qajar period, women’s clothing for going out was a Chador which covered their body from head to their foot, usually sewed from woolen and silk fabrics that were in black, dark blue, azure colors.