Traditional clothes | The history of traditional clothes of Gilan province dates back to the objects discovered at the Cheragh-Ali Tapeh of Rustamabad (Marlik). These findings show the variety of ornaments used on skirts, shirts, and headbands.
Clothes in Gilan and other areas, represent thoughts, culture, art, lifestyle and the relationship of people with nature. The design of clothes in this area are divided into two categories: Men clothes and women clothes. 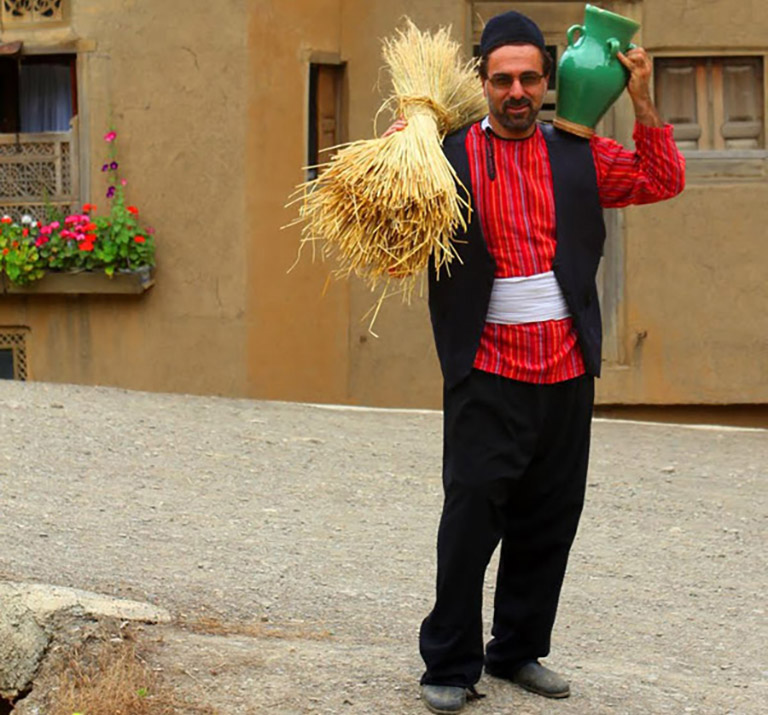 Men in the west of Gilan wear a cloth which is often in black and white, whereas men in the east of Gilan wear trousers with tight leg openings, especially old people. The color of this trouser is dark black.
Charvadari trouser, Ghadek, Tange- e Tuman, Dij, coat, Choomush, Orssi, cap, Koola va Shoola are also men’s local clothes in Gilan.

Ghadek is a long coat which has no collar. Its fabric is made of cotton fabrics.

Men in Talesh wore a coat named Chukha which was sewn from shawl. The amount of shawl used in sewing this coat is 12 (half a meter) and the width of the shawl for sewing is 80-70 centimeters.

Men in Gilan wore “Choomush” which is a type of footwear made of leather. most of men wore it in mountainous regions of Gilan.
Orssi, Charoogh, Giveh, Galesh boot, Chukutur and wooden slippers or “katele” (in Mazandarani dialect), are traditional footwear of Mazandaran.

Orssi is a type of traditional leather shoe.

This footwear is made of leather.

Chukutur was a type of clothe which was worn when it was snowy.

Shepherds wear shorter clothe in day, known as “Koola”, and at night, they wear another type of clothe called “Shoola”. They were both made of felt. 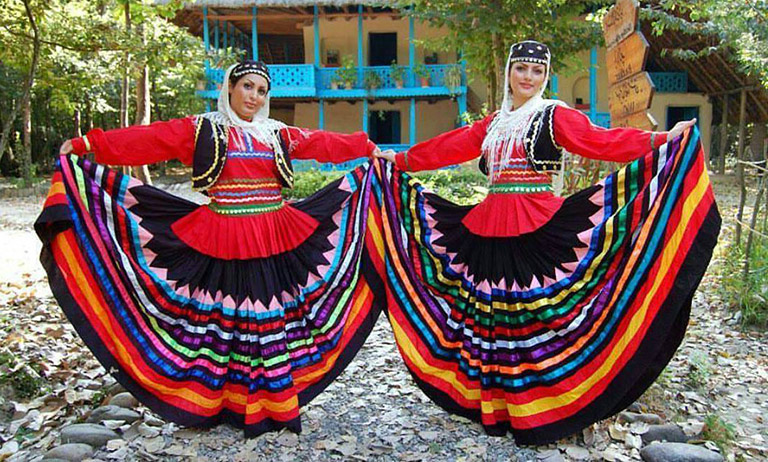 Pirahan is a type of drees of Gilan’s women. This dress is called “Shessi” in the Taleshi dialect, and in the east of Talesh, it is called “Pirhan” or “Joma”. Colorful threads are used in front of this dress.
The most famous Pirhan is in Pashaki area. This cloth is sewn with sewing machine and its fabric is wowen with silk. Girls wear this cloth on wedding days or at parties.

One of the most popular clothes for women in Gilan is Jeligheh. This cloth is called, Jelekhteh, Niftaneh in the western part of Gilan, and in the eastern part of Gilan, it is called Jarghadeh or Jarzagheh. Besides, in Gilan plains, it is called Jeletgheh or Jelekhteh. The popular type of Jeligheh has basically three buttons and three pockets on each side, and it has a small buckle behind it that let Jeligheh to be either tightened or loosen.

It is a cloth sewn from velvet which was a women clothe in eastern mountains and Ghasemabad.

Shaliteh is a short skirt which was worn by women. In west of Gilan, Taleshi people call it ” Shelar”.